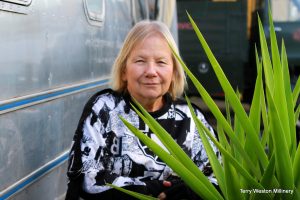 In 2009. while working at London College of Fashion and freelancing in textile design for fashion, I did a four-day course on Millinery Trimmings with the late Andrew Bristow.

That was it: Andrew was a great teacher and milliner and I found a new design direction as I became fascinated by the many processes involved in designing and making a hat. Several short courses at both LCF and KCC (Kensington and Chelsea College) followed, and in 2015 I undertook the excellent full-time HNC at KCC.

My final collection ‘Suspension and Motion’ was inspired by the work of Alexander Calder, particularly the mobiles, and Peter Lanyon’s gliding paintings. In November 2016 I had a joint exhibition at Croydon School of Art with Paul Chapman, who sculpts beautiful objects from reclaimed wood. From January to August 2017 I learnt much about couture techniques and design for millinery by working for Edwina Ibbotson, as well as working at Atelier Millinery one day a week for several months. Both operations gave me additional insights into the business opportunities open to milliners. I also do occasional classes with the renowned milliner Marie O’Regan.

Following graduation from Leeds University with a degree in textile design, I worked at LCF and Central School of Art and Design (now CSM) teaching textiles, as well as occasional lectures for art schools across London and the home counties, combined with designing for fashion print. At various points in my career I have run successful small businesses: Therese Harvey Cards (greetings cards of brass rubbings sold to Heals, Liberty and every cathedral city in England); Weston Tshirts (printed motorcycles logos on Tshirts sold to dealers in England and the Isle of Man and at trade shows); with Anoma Wijewardene, Cinnamon Coast (designing and importing batik beachwear stocked by Harrods, Harvey Nichols, Fenwick and Simpsons of Piccadilly); and, with Helen Anstey, Weston Publishing Limited (selling books about terms, including ‘The Anstey Weston Guide to  textile terms’, throughout the UK and in Europe).

Millinery is a hard task-master and free time is limited but I find time for walking in London, where every excursion involves new discoveries, and in the glorious countryside and coast surrounding Bridport and West Bay in West Dorset, where I am lucky enough to have family and friends.

Other essentials of life are food, films and art exhibitions, so London is the best place to live and work. Last, but certainly not least, my many friends keep me sane and happy. 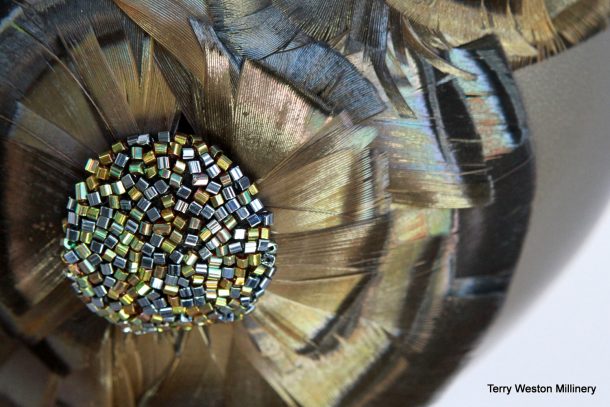 You have Successfully Subscribed!

This website uses cookies to improve your experience. We'll assume you're ok with this, but you can opt-out if you wish.Accept Read More